WE USE COOKIES (our own and third party) in order to offer a better service and to display Ads. If you continue to browse, we consider that you accept our cookies policy
Home > Grammar > Spanish Possessives 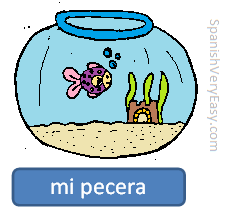 In Spanish, there are two kind of possessives: possessive adjectives and possessive pronouns.

Both are used to indicate belonging or relationships with animals, things and people

Mi abuela fue profesora
My grandmother was a teacher

Este coche es nuestro
This car is ours

La pelota es mía
The ball is mine

The golden rule is: